Construction Layout (or Stake-Out Services) is a type of survey that controls the on-the-ground, horizontal or vertical location of improvements to be constructed. This most often will be in accordance with architectural or engineering drawings, plot plans or zoning regulations, by the placement of offset stakes. No plan need be prepared; however, documentation with respect to the position of points placed shall be maintained as a permanent record.

Typically, a construction stake-out plan is created by the surveyor as a tool to indicate the relationship between the offset stakes set and the proposed improvements. Notes made on the map are clear as to the intentions of offsets. Use of a cut sheet is often necessary to display the necessary adjustments to grade.

Though it’s not the equipment that makes the surveyor, the Trimble S6 certainly allows us to do more than what your average total station can do. Its key feature is its ability to be controlled remotely and lock-on our reflective prisms as we walk around a site.

Though sometimes referred to as the “gun”, these total stations are the product of EDMs (Electronic Distance Meters), which were the first instruments to be able to “shoot” a distance using infrared waves. Before then, surveyors had to pull a special kind of tape measure sometimes over hundreds of feet to measure the slope distance between two points, or use stadia rods and special instruments to calculate a distance.

Now obviously measuring distance accurately is a key feature of surveying. But what is often not known is how important the angular measurements on those distances are. The total station is constantly calculating the angle it’s facing relative to what surveyors call the “backsight”. The backsight is a prism fixed on a tripod (just like the total station) over a known point. Many of the procedures for creating what we call control points (the points we set our instrument and backsights on) are automated, which saves us valuable time in the field. 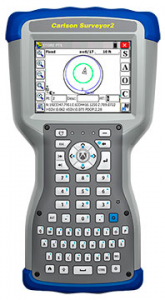 Another key feature of any robotic total station is its ability to lay points out in real-time as you move around a site.Because the instrument is locked on our reflective prism, it is constantly updating our position relative to the point we want to stake and flag such as, for example, a property corner. This bypasses the need for constant communication between the instrument operator and the “rodman” (the guy that walks around with the prism, often attached to a rod) and makes it a more seamless operation.

The data collector (depicted in the photo on the right) can be seen as the remote that controls the total station. But it has functionalities far beyond simply control, which include the ability to draft in the field, calculate new points, and store additional information such as descriptions and notes. In example, if we were tasked with laying out the center of a road, but upon arriving at the site, are asked to give offsets to the center instead, doing so with a modern data collector is not only feasible but easy. Prior to such technology, computing those offsets would have required a trip back to the office computer.

There are of course numerous other advantages to having a robotic station, but in the spirit of brevity, I can instead come to a general conclusion. The evolution of technology has greatly affected how surveying is done and the kind of services it can offer. To an extent, this puts the surveying industry on a technological treadmill; those who fail to invest in technology will be left behind. But for the industry as a whole, the amount of new services we can offer with such technology give us a stronger presence in the economy. In the end, we believe such technology genuinely improves the quality of our work and its value.