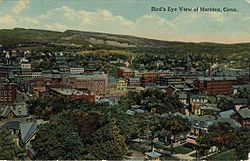 Contact Godfrey-Hoffman & Hodge for any information about Civil Engineering in Meriden, Connecticut. GHH has professional experience in New Haven County for the following services:

Originally part of Wallingford, Meriden became a town in 1806, and then a city in 1867. It earned the nickname “Silver City”, due to the large number of cutlery companies headquartered there such as Internation Sliver and Meriden Cutlery. The city showcases a number of prominent peaks of the Metacomet Ridge, while the Quinnipiac river cuts through the southwest quadrant, which is known to residents as “South Meriden”

To veiw the city zoning regulations for Meriden, Click Here.

For more information about civil engineering in Meriden, Please fill out the form and we will contact you within 2-3 business days.